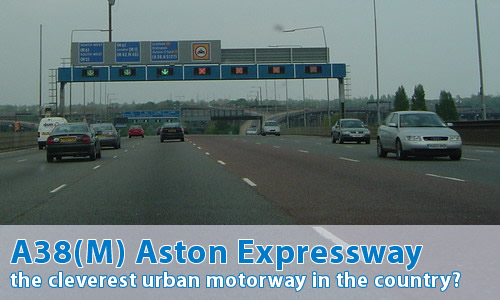 It leads from the City Centre out to Spaghetti Junction, more properly known as junction 6 of the M6

Well, actually, I've got a confession to make.

What do you mean by that?

It's not actually all that pathetic. It is a single carriageway motorway, though!

Err, no. It's seven lanes across, and has tidal flow on it, so that usually there's three lanes each way, but in a morning there's four into Birmingham, and two out, and vice versa in an evening.

So, there's no barrier in the middle then? Isn't that rather dangerous?

Actually, no it's not. There's always a lane gap between the traffic.

The speed limit is also only 50mph, rather than 70, so there's only a 100mph closing speed, not 140. You get higher closing speeds than that on rural single carriageways.

I get the feeling you quite like this road! What have you got it here for then?

Well, there's no hard shoulder either...

Yes, I do quite like it - but it's unusual and different, and that's one of the points of Pathetic Motorways.

I felt that it was so unusual that it deserved its own photo gallery.

Can I see some more photographs?

"I think the A38(M) is rather great actually. To lump it in with Pathetic Motorways simply due to it's single carriageway-ness is a bit unfair. But the photos are a welcome sight (photos of roads always are), so I can't complain about your inclusion of the road too much."

"Aw come on, this is a hard core inner city motorway, with lots of pollution, noise and concrete. Just because it's one big flat road surface it's not really a single carriageway either. The whole thing is big, ugly and sworn at a lot, it's a full on road in my book."

Phil Reynolds has a bit of information, including why motorbikes are banned from the central lane:

The one pathetic thing about A38(M), now fixed but with motorbikes banned from the centre lane, was the drainage channel in the centre which had grilles which could move apart. Several serious accidents occurred, and then the drainage was altered. Sadly, with it, a motorbike ban on the centre lane was deemed necessary.

During the work, it was effectively a dual-carriageway, although the central reservation just consisted of lots of cones. This persisted for many months, if not at least a year.

The lane indicators also changed with time. I'm not sure what they used in 1972 but they used a white arrow for open, red cross for closed later. The white arrow was then changed to green.

Adam Chard has an interesting bit of news:

The Aston Expressway got me from Erdington to Aston University and back very effectively and quickly for a whole year. Loved the thing.

A point was made about having no hard shoulders? We broke down on it once - the overhead lane signs were quickly changed so that no one drove into the back of us. Job done.

Paul Berry has some entertaining information:

I thought you might like to know that in Off The Motorway, the family motorist's companion, in its preamble to the M6 chapter, mentions that there is a vinegar main bridging the A38(M) to link up both sides of the HP factory in Aston.

From looking at your photos, the pipe could be housed in the gantry here.

Simon Hollet has a thought:

The A38(M) has funky roundabout signs on gantries over the slips. Very cool. The one problem with its single carriagewayness is simply the scare factor for those new to the road. You go round the tight 1960s slips at Spaghetti (another bit of proof of the excellence of this road) and end up going onto a motorway with no barrier. The tidal flow isn't unique, but the other cases of it are fairly short and not on routes that see a lot of non-local traffic, and drivers are unprepared for it. However tidal flow is a brilliant idea, and should be used more. Another thing that makes the A38(M) even more cool is the northern ending on the A38 - a double deck sliproad. I also wonder if north of those slips turning off, the A5127(M) exists :P.

Steve Caddick has some more information about that HP factory bridge:

The other side of the HP factory has been demolished for some time and the vinegar pipe he mentions no longer exists. However, he was right the pipe was housed in the gantry in your picture.

I also should point out the the red tarmac used on this motorway is a recent addition.

Martin Gray has a thought:

I'd also like to put my twopennethworth in here with regard to the mystery surrounding the vestigial stubs of the slip roads at the end of this short urban motorway that plug directly into the A5127 towards Erdington and Sutton Coldfield after the main alignment of the A38(M) swings over the roundabout and feeds into the A38 Tyburn Road via the spectacular split-level slip road.

It's clear that on all maps and in real life, this "stub" plugging into the A5127 is blue (with blue signage), thus meaning motorway regulations for its very short length. If the flyover at the London Road end of the Mancunian Way in Manchester can now officially be regarded by its "secret" designation of the A635(M), then surely this equally short "stub" of an otherwise un-numbered stretch of motorway plugging into the A5127 SHOULD by all accounts be officially considered as a secret motorway called...wait for it... the A5127(M)!!!

What do you reckon? Is there any mileage in this at all (pun fully intended)?

Birmingham deserves a secret motorway all to itself as well, surely!!

My recollection is that the vinegar main was located in the Tower Road bridge. The pipe was stainless steel and ran between the HP sites on opposite sides of the completed Aston Expressway. Tower Road bridge was restricted to light vehicles (electric trucks - I believe)running between the two HP sites. All mains and utilities were routed via the new bridges. None of the gantries were designed to carry mains or utilities across the Expressway.

I work close to this road and always get a bit of a buzz as I leave the M6 heading for the bright lights of Brum. By the way we all know it as the Aston Distressway because there can be some wonderful delays at time .