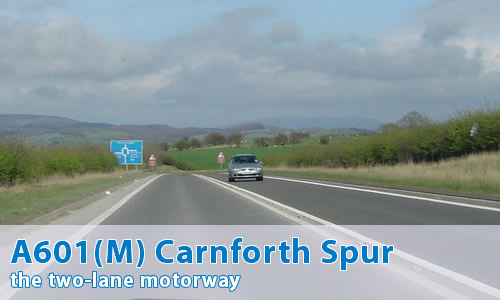 Carnforth, Lancashire. It meets the M6 at junction 35.

The northern section was originally the top end of the M6 Lancaster By-pass, one of the first sections of motorway in the UK.

The M6 was later extended northwards towards Kendal and Penrith, not from the end but from junction 35, leaving a small stub all left over and unloved. As this map shows, the current northern section of A601(M) was numbered as just a spur of the M6, with the junction at the end numbered 35a - just as on the signs today.

Whilst this may seem strange, the plan always was for the motorway to be extended from that point. Indeed, the Lancaster Bypass had quite a pronounced kink in it where junction 35 is today - though no provision for the extention itself was included - there were no roundabouts in the middle of the M6 or the like. This wasn't that unusual - the southern end of the bypass needed rebuilding to connect to the Preston to Lancaster stretch, and serious work was needed at the northern end of the Preston Bypass for that to connect up as well.

There is some small evidence left of the kink in the bypass, although it's very difficult to see from the road - though it's quite easy to pick out from the air. It's the bridge that carried the motorway over the river just to the west of the junction 35 roundabout.

That's all perfectly reasonable, so why is it here?

Well, that's not the end of the story. In the 1990s, the southern section of the motorway was built to service the quarries at Over Kellet - which was a very sensible idea, given that before that all of the heavy quarry traffic had to drive straight through the middle of Carnforth.

However, this extension was built as a single carriageway road, with motorway restrictions. This section has no hard shoulders, a double white line down the middle, and not so much as a lay-by, let alone a hard shoulder! It also ends at a little T-junction on a B-road.

It's probably the section of motorway with the lowest standard in the UK - though having said that, any larger would be overkill, and it's not often that the section gets congested. Well, not beyond a couple of vehicles queuing for the "Give Way" lines at the end...

Can I see some photographs?

Can I see some video footage?

Absolutely - over on the video page.

Yes, all over on the comments page.