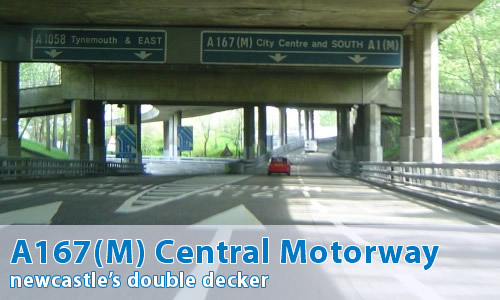 What do you mean by that?

It's fantastic. I mean absolutely, unquestionably wonderful. I've no idea what it's like to use it day in and day out, but I can honestly say that I went back and forth along it actually smiling!

Yeah, that is pretty sad! So what's so good about it?

Where do I start?

Well, for one thing it's pretty much the only evidence from one of those stunning 1960s plans that are just astonishing when looked at through modern eyes.

All this in a city that's not actually all that large in population terms!

Firstly, it's an urban motorway.

Then, it pulls absolutely every trick in the urban motorways book. There's tight curves on both the main route and the sliproads, there's exits and entrances that come in from the right, and there's a unique double-decked section, where one carriageway runs over the top of the other.

There's also an unfinished junction or two, and an extension that never happened in quite the way some thought it would...

Take a look here, and see what you think!

Show me the photos!

"I remember when this was being built in the mid-70s; a chunk was taken from our school field and the eastern end of Jesmond Road was demolished to make way for it.

Back then it was designated A1(M), with the eastern Coast Rd exit as A1058(M) and the western one A696(M). Both of these subsequently disappeared "

Does anyone else know anything about the A696(M) and A1058(M) designations? Does anyone have any evidence of the former?

Alex Richardson has a thought:

"The A167(M) is a motorway with a lot of good intentions but because the motorway is not hooked to any other motorways in the area it only use is to feed the traffic in and out of the city of Newcastle. The Road does not have a hard shoulder and it is only two lanes wide at most and because of this there is a risk that in the future this road could go the way of the A102(M) and A40(M)and be downgraded to possibly just A167. Could this road and the other inner-city motorways like the A58(M), A57(M) and the A64(M) in the future lose its motorway rights? "

I'm certain that I have seen a photograph from the time Central Motorway East opened, showing an overhead sign, with left and right arrows, marking the North West Radial/Great North Road divergence as 'A696(M)/A1(M)' - there's no overhead sign there now, and if there was the roads would be marked 'A167/B1318'.

I can also confirm, but only from memory, 'A1058(M)'; certainly in its later years the sign marking the road as a motorway was patched leaving an off-centre 'A1058'. The sign has now been replaced, but the background is still blue and 'A1058' is still in motorway font. When the Central Motorway opened the Coast Road motorway plan had not yet been cancelled, so 'A1058(M)' was expected to refer to a longer stretch of road than the few hundred yards to the Osborne Road roundabout.

I've used this motorway before and think it's amazing! Especially the double decked section if you're travelling south on the underside.

I live in Edinburgh but because I've got family in the north east, visits to Newcastle are common and I can remember sitting in the back of my parent's car at a young age feeling excited whenever we approached this motorway. I always found the double decked section quite futuristic and exciting, like you're entering a tunnel to another dimension or something!! (the things we imagine as kids eh?!).

I don't think it'll get downgraded like the motorways in London because that was to do with politics rather than road standards. i.e. Transport for London not having the authority to be in charge of motorways, so all the '(M)' suffixes had to go.

I for one would be very upset if this road got its blue signs replaced for green ones as I think it's an amazing piece of 1970s engineering which still holds up very well today. Roads with green signs just don't have the same feeling!

I use this this motorway every day since moving to Newcastle and I must say I love it. It is always exciting to drive! It was obviously part of a magnificent plan, expensive and heavily engineered, especially the junction at Barras Bridge which is three level and has steep and highly curved exit lanes from/to the city centre. This junction is a beautiful, complex structure which can appreciated in the car or on foot, using one of the subways to exhibition park. It adds to the urban environment as opposed to so many urban road schemes from the 1960/70s like the Birmingham Inner Ring Road. The A167(M) also functions very well with todays traffic levels. Only the recent signal changes at Gateshead across the Tyne Bridge and at Jesmond on the coast road mean that traffic is often at a standstill on the motorway. Long live the A167(M)!

Use the damn thing every day, I've got a choice of routes in the morning, and most time i'll go over 'the' bridge. I live in Gosforth and start my day at the Team Valley, so options are to use the snail like western bypass, sorry A1 or go through the toon taking in the sight of St James' on the way . . But give me the good ol' central any morning

Hi there, just want to comment on a fantastic site and the A167(M).

In hindsight, whilst it is a terrific design of motorway, this is what makes it pathetic too. If you don't know the area, you will find it hard to use the "Central Motorway". In my opinion, the patheticness comes in the form of the lanes and junctions on there. As you enter from the town moor side of the motorway people don't realise that you only ever need to use one lane and that is the nearside lane on entry. It really should have one lane on entry but the planners have used 2 and as you enter on the right lane from town moor, 9 times out of 10, you have to switch to the left (which then becomes the middle lane for 200 yards)to avoid traffic merging from the city centre on the right hand side.

It can be quite confusing as in an area the size of a football pitch, you have the merger with the A167(M) and great north road, claremont road, the road leading to Cradlewell and of course the rest of the underpass on the A167(M).

It is without a doubt, truly fantastic, truly confusing and truly pathetic...