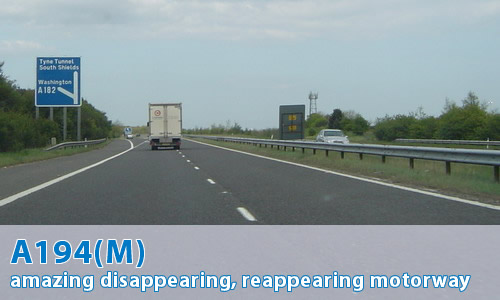 What's so special about this motorway then?

Firstly, it's short - less than four miles from end to end...

I guess it belongs here, then! What's it used for?

Really, it's to get traffic between County Durham and the north, via the Tyne Tunnel.

I see. It sounds a bit dull, though. Is there anything more exciting about it?

I don't know about exciting, but it does have a unique feature amongst British Motorways...

Quit stalling! What is it?

It's the only motorway to have changed its number, then got the original one back again!

How did that work then?

Well, it's all about the movement of the A1 though Newcastle-upon-Tyne.

When this motorway was constructed, the A1 ran straight through the city centre, and so peeled off the motorway, leaving the A194(M) pretty much the same as it is today.

Finally, the Western Bypass was completed, and the A1 was diverted that side of the city and so the A194(M) was restored!

OK, can I see what it looks like then?

Well, as you asked so nicely...

That signage (at the A1/A194(M) fork), whilst unusual, is not unique.
Somewhere I have a photo of Ferrybridge interchange, southbound, with
M62 and A1 on a butterfly sign like that, both in Motorway. Though that's probably gone now it's A162...

The narrow hard-shoulder might be hatched out because, er, it's narrow? It's where additional protection has been installed beside the bridge parapet, isn't it? And so it's almost certainly not wide enough to be marked out as a real hard shoulder.

The "motorways merge" sign for meeting A1(M) that's only been motorway for a hundred yards or so is obviously a remnant of earlier times before the southbound on-slip was added: before that, it would have been motorway right up to the (now) A167 Birtley (Angel of the North) junction, I think. I wonder if that section had its own number, to qualify as pathetic?

Looking at your recent update for the A194(M), you appear to have revealed a so far undocumented 'former' motorway. In the maps showing the changes of numbering, the original A1(M) course clearly goes round the north side of Birtley to. In the more recent map, the section of road from the A1(M)/A194(M)junction is labelled as the A69, though it is now - as you note in the text - the A1 in its latest guise, doing an inelegant transition from motorway to A road at A1(M) junction 65. A former motorway: QED!