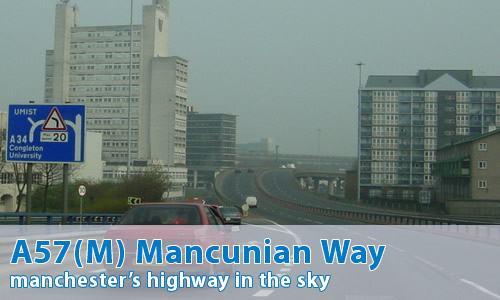 Manchester City Centre. It forms the southern part of the Manchester and Salford Inner Ring Road.

When was it built?

This is possibly the lowest standard dual carriageway motorway in the UK. There are some at-grade junctions along some of its sliproads, there's no hard shoulder along any of its length.

You can tell it was originally just plain A57, and the (M) bit got tacked on later.

Oh, and it has the most ridiculous piece of motorway in the country: an unfinished sliproad.

An unfinished sliproad? Surely there's plenty of those up and down the country?

What are you on about then?

Well, firstly it's twenty up in the air when the sliproad suddenly stops.

You see, if it was finished, it would go the wrong way up a one-way street...

That sounds pretty stupid. Have you got any photos of this mess?

Well, you know I can never turn down that kind of request!

Can I see some photographs of the actual motorway now?

Comments before May 2008 can be found in the relevant archive.

An anonymous contributor writes [May 08]:

I've lived by, and have regularly used the Mancunian Way for a number of years, and have become quite fond of it. It's a much more pleasant road to live by than most, with its trees, and the spreading of traffic between two decks.

Remember its construction was quite pioneering, and mistakes would be inevitable. I doubt anyone would foresee the traffic volumes it would eventually carry. You should always give it credit for lasting 40 years (and counting).

Think of the hanging slip road to nowhere as a pleasant quirk. The world changes, fashions change, and so do people's minds. Thank god they didn't chisel it off.

Yes, a couple of slip roads do keen up your driving a bit, and it's hell at rush hour, but drive carefully and don't commute on it. If you doubt it's value as a motorway, then check out the traffic snarl ups when it's closed for maintenance. What everyone should dread is its eventual replacement. 3 years of chaos anyone?

I'm loving the 'Sheffield 39' destination listed on that overhead gantry. I always laugh at the similar optimism when heading out on the M67 (although my smile usually disappears fairly quickly when I hit Mottram) but surely it's completely hilarious to have this signposted bang in the centre of Manc!? How peed off would you be trying to get to Sheffield from the middle of Manchester and somehow didn't know what lay (or rather didn't lie) ahead? 'Well we're on the motorway and it's only 39 miles to go, we'll be there in no time!'