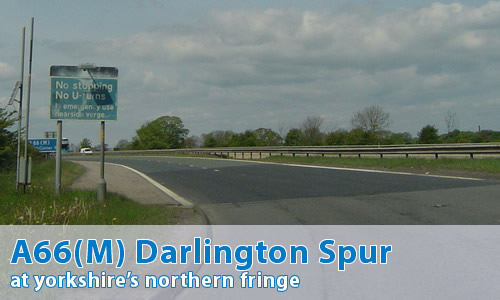 Near Darlington, County Durham (although the motorway itself is in North Yorkshire).

Can you show me where it is on a map?

It's absolutely tiny: about 2 miles long.

Other than that, there's not really a lot to say!

It's short and dull.

Come on! Say something!

Well, it has one of the last remaining "No Stopping, No U-Turns" signs still in use. These are very old fashioned these days, and date from the days when motorways were new and exciting - even this one!

I give up. Can I see some photographs then??

Thanks to Toby Speight, yes you can!

Phil Reynolds starts us off:

I think the A66(M) was my first ever experience of a 'blink and you'll miss it' motorway - at least, one with its number on a sign anyway - although how it compares with the northern section of the former A102(M), I don't know.

Tom Sheard bring us a load of information:

Just thought I'd send you my comments about the A66(M) for your excellent site.

First I should point out that I've been using this road almost everyday for the last 10 or so years, both for getting to and from work and for shopping in Darlington and Teesside so have come to know it pretty well! Whilst I'd agree that it ain't the most significant motorway in the UK, it does have some IMHO important plus points.

For historical reasons its a great example of early motorway planning, being from like you say from the old fashioned days and you couldn't see it being built, at least to this standard, these days but thankfully it was. I say this as it does provide the very good job of a quick access to Darlington and Teesside and bypasses the villages of Barton, Stapleton etc which were on the old A1, and like I say, would if the A1(M) was built now probably either have to put up with the traffic or have much more intrusive bypasses near the homes themselves. Plus it has left the old unclassified A1 as a good quality non-motorway route (is always full of learners!).

It is also useful as a big car park! When there are either problems on the A1(M) or events like races at Croft circuit the police tend to use the A66(M) to hold all the traffic, much better than it backing up on the A1 or A167.

The only negative annoyance that I have with the A66(M) is that it doesn't go further, i.e. that the Darlington bypass is only a two-lane road between this motorway and the dual-carriageway to Teesside, having way to many roundabouts after coming of two good, grade-separated parts of the A66.

As to the charge of it being dull I actually quite like the way it starts at a hugely overblown junction on the A1(M) and swings down under it. And is a good road for a bit of, shall we say, competitive "driving", not that of course I'd take part in such behaviour! And it does have a huge roundabout at its end that confuses people who don't know that only one lane leaves at the other side.

My final comment would be that it does need improving by the provision of north facing slip roads onto the A1(M) to give a much better access out of from the south of Darlington to the north so you aren't forced to use the terrible A68 or A167 through the north of Darlington. "

"Is this really a motorway? I was travelling on it yesterday to see Carlisle play Darlington and it's hopeless. Apart from the No sign, which looks like it's going to fall apart, there's absolutely nothing going for it. It's D2, is less than 2 miles long, and is accessed from a very badly signposted roundabout which is preceded by a narrow and dangerous section of the A66 that should have been part of the Darlington by pass but wasn't. It's a total joke."

I live in Darlington, and must use this motorway on average once a week. It's a shame that the photos featured on this site aren't going from the A1(M)into Darlington, because there's several more things from that direction not included on the site which make the motorway even more pathetic!

1) The way it's signposted off the A1(M) - it's a ridiculously overblown junction given the the glorified slip road it connects with - with two gantries and the like, i t's almost like the M1 and M6 junction for example.

2) The underpass of the A1(M) is round a very sharp bend - it could possibly be the sharpest bend on a motorway?

3) The route confirmation sign is all wrong - the A66(M) is in the wrong font (transport rather than motorway), and the the mileage destinations given are Darlington 3 miles and Teesside 17 miles - but the 3 is much bigger than the 17!

4) The seemingly never ending roundabout at the end - the only road off it apart from the A66 is a minor unclassified road!