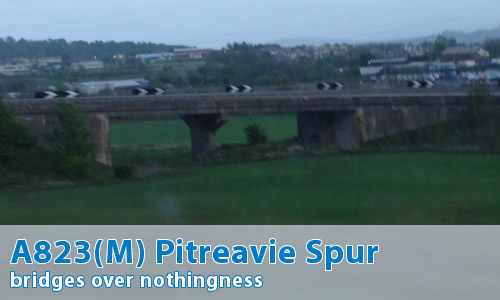 In what way, unfinished?

OK, let's look at the western end. The roundabout has a nice drop in the middle, just perfect to fit a small motorway through, and there's plenty of space to the west to allow for a motorway to pass, including space for the sliproads.

The eastern end is also generally unfinished, and looks like a road should go straight through the middle, and out the other side. It's also an enormous size, especially when you consider the traffic levels involved.

It's also the only motorway whose carriageways are so far apart that it's difficult to see the other throughout its entire length. It's almost as if the motorway itself was never built, just the sliproads...

Where was it supposed to go?

Well, I had an email from a contributor who wishes to remain anonymous. He provided the following information:

I can't profess to know the authoritative answers to these questions, but as an ex-resident of the area I have picked up bits and pieces over the years, from press and official documents.

The original plan was for a Rosyth northern bypass, to connect with the A985, somewhere near to the junction with Limekilns Road. Ironically it would now need a complete reconstruction of the hollow roundabout to accommodate a road of modern standards; although it would probably just be a D2. The preferred option was to then under-pass the Fife Circle railway line.

I understand that the extended A823(M) (probably just A985 by then!) would have terminated at the junction with the B9156. That is a particularly bad junction as it exists. There is a very acute angle where the B9156 joins the A985, with just a Give Way. What makes it worse is that there is no centre refuge on the A road's mainline and it is just over a blind summit. The A985 has steadily got busier over the years and, while improved in most places, this junction remains the worst. It was one of the first ones my driving instructor told me to look out for!

The extended A823(M) would have therefore solved a number of problems in safety terms; the preferred option was an at grade roundabout. However, the area is of some local wildlife interest. Much of the land in the area is part of the Estate of Lord Elgin (the Elgins of the Marbles fame), so who knows what sort of influence that may have or have not had!

As for East of the M90: I think the original idea was for J2 to be a significant intersection (a sort of partial Whirlpool) between the M90 and a new Fife Regional Road. It is my understanding that the original plan for the East Fife Regional Road (EFRR) was to roughly follow the A921 then inland to Kirkcaldy via the line of what is now the B9157. (This used to be the Primary Trunk Route between Kirkcaldy and the Forth Rd Br. It's a very good B road!). This route would have also served the new Fife Ethylene Plant at Mossmorran and various quarries etc along the route - which also misses most settlements. The EFRR was eventually built, as we know, as the A92 using a much more inland alignment serving Cowdenbeath and Glenrothes.

The WFRR would have gone right out to the Kincardine Bridge and would have served as a vastly upgraded Fife (and probably Dundee and Perth) to Glasgow route. The achilles heel being of course the Kincardine Br, a major single carriageway bottleneck, albeit a strategic all-weather one (for the 40 hours or so a year that the Forth Rd Bridge is closed). These problems are all currently being addressed. If traffic levels continue to grow then over the very long term I feel could well be little option but to build the WFRR, but there are many more realistic short-medium term options which will reduce the need for it. 1) A new Forth crossing, probably got to be on the cards because of the structural and capacity problems of the existing bridge; 2) a reopened Stirling - Alloa - Kincardine railway line (eventually back through to Dunfermline, with the former section under construction as we speak); 3) A8000 upgrade to full M9 spur now under construction, thus making Forth crossing a more viable Fife-Glasgow route; and 4) new imminently likely peak-time tolling regime on the Forth Rd Br. (£4 northbound up from £1 currently) which will encourage more Fife-Edinburgh commuters to switch to public transport (mainly bus via the vast new and expanding Park and Ride facility at the A90/B981 junction).

I believe it is not entirely a dead idea and over the recent years has been intermittently referred to in the local press. It was a 'live' part of the 1999 Scottish Executive Strategic Roads Review but has now been deferred. In the current iteration of the SRR, the A985 Rosyth Bypass scheme (as it is known) is 'held in abeyance' to be considered alongside other emerging priorities ... appraised using a multi-modal approach'. Given active works to the Kincardine Bridge and the recent start on the A8000/M9 spur it is logical to see that it must be considered alongside these. Of course, improved south-of-Forth links may draw through traffic away from the current A985 lessening the need for a Rosyth bypass.....

Ironically, as you can see, the whole exercise would have spelt the death knell for the rather curious A823(M)!!!

Can I see some photographs?

Russell Oakes has a theory:

I have just been looking at the new pathetic Motorway on the list. So I got my 1978 Marks and Spencer map out and looked at that area. As a theory, the A823(M) was meant to go westward to either the M876 or J9 of the M80 (the map shows a triangular lay-out). Eastward, I suppose it was just meant to meet up with the A92 at Aberdour to form a by-pass for Inverkeithing.

I have a booklet published to commemorate the opening of the Forth Road Bridge which makes no mention of this road being a motorway. The M90 Junction 2 is described as:
"The junction on the north side of the bridge is a unique junction, appropriately nicknamed "Octopus", using eight different connecting roads.

Whilst the A823 (M) is described as: "a further mile of dual carriageway links the north south road with Dunfermline".

What is now the M90 opened as A90 between junction 1 and a now removed junction with the B196 & B981 (old A90). It would be sensible to assume the A823(M) only came about when the aforementioned section of the A90 was incorporated into the M90.

Paul Robertson has a question:

Phil Keller mentions "The junction on the north side of the bridge is a unique junction, appropriately nicknamed "Octopus", using eight different connecting roads". Considering only 4 sliproads were ever built why was this put into a guidebook? Was extension of the motorway in the pipeline or had it just been built with the possibility of being upgraded if needed? It is a similar idea to the A92 B921 at Glenrothes which both have room for interchanges to be added at junctions.

Is it not possible that with the A985 being upgraded that at some point we could see the A823(M) extended west to meet up with it to help provide a link to the Kincardine Bridge? This would be useful for commuter traffic and also for when the Forth Road Bridge is closed in bad weather.

Andy Kettles has spotted something:

Just to help shed some more light on this motorway I noticed plaque when I was last in the area in Nov 04 which had some very useful information.

Where the old main service area used to be (it is now demolished but what was the car park, the bridge admin block and viewing area are still intact) there is a commemorative plaque regarding the opening of the Forth Road Bridge. Amongst other things this shows on it a map of the then completed roads in the area in 1964 plus some dotted lines and comments regarding proposed future roads. These included a West to East running Fife Motorway running very close to the coast with the completed section of the route what is now the A823(M) being part of this route. This explains the room left for a route through the roundabout and the space with the M90 junction to provide a full whirlpool interchange. What this motorway was called or what number it was to be given, I don't know, but it was clearly in the plans of the late 50's and early 60's planners.

The A823(M) which takes its umbilical from Jct 1 of the M90, and runs for all of a mile before stopping in the middle of nowhere, at a traditional motorway slip and flyover, with a big hole in the middle and nothing to fly over.

Locals tell me this was supposed to link all the way to Kincardine, to join the M876 on the other side of the bridge but they ran out of money at Dunfermline, and presumably at Skin Flatts on the other side.

Nothing like foresight, now with the Kincardine by-pass, the second Forth crossing, talk is all about a link road through West Fife.......

Whilst it might just be the owners of the nearby Pitreavie Business Park expecting more companies to site their premises there, there is a rather bizarre stretch of dual carriageway that is shoved down to the left onto a normal road, with a few metres of dual carriageway, now used as a bottle bank showing that this probably wasn't the original end of the road.

For an aerial view see here.

More recently, this road was proposed to form part of the planned tunnel option under the Forth (as the Forth's new crossing), the road carrying on past the north of Rosyth before going underground north of Limekilns.  However, the Scottish Government has chosen to go ahead with another bridge instead.

My late grandfather could have no doubt answered the question as to what this small section of motorway was supposed to become.  As a senior civil engineer with the Scottish Office (the Scottish Government's predecessor), he was largely responsible for the design of the northern approach roads to the then new Forth Road Bridge.