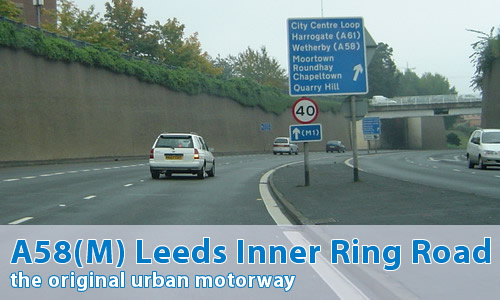 Leeds City Centre. It's the western half of the Inner Ring Road. It's also the longer and more impressive half at a whole 1 mile (1.6km) long.

What's the other half then?

One road, two numbers. Why?

Well, it does seem a bit daft, doesn't it.

The answer is really quite simple - the A58 turns off the Inner Ring Road half way along, so the other half needs a different number.

So, what can you tell me about it?

Well, a bit of trivia first - this was the first "real" urban motorway in a city centre setting, coming along a few years before the A57(M).

The motorway itself is very well designed for its setting. It's in a deep vertical-sided cutting pretty much all the way along - meaning that you can be right next to the motorway and almost be unaware of its presence. Numerous buildings are built across the top of the motorway - the Westgate Tunnel in the middle of the motorway has hospital buildings (amongst others) on top of it for example.

There's also possibly the most sensible item ever built over an inner-city motorway in the UK on here.

This is no usual car park, though. It has access to it directly from the motorway - the idea being that people would drive in along the Inner Ring Road, and go straight into the car park. This would, of course, mean less congestion on city streets, less emissions from vehicles sitting in traffic trying to get to a car park, and less hassle for everyone.

It's a great idea.

Not only that, but seeing the signage inside the car park for the motorway is quite bizarre!

One more thing too - there's a right-hand exit on here just to keep you entertained. Or is it? No-one seems to be quite sure - take a look at the A64(M) page for the full debate...

Is it worth some photos then?

Of course! And as an added bonus, there's a video of the entire Leeds Inner Ring Road, travelling from west to east.

The Car Park over the motorway must have seemed like a good idea at the time - but a glance at the map will show you that it's a long, long, long way into town from the car park. A least a mile from the main shops in town - perhaps a little less to the Merrion Centre (if it's still there) and the St John's Centre (which is still there).

Rob Pengelly is a regular user of the motorway:

Great to see the A58(M) finally make it - it long merited inclusion. As a native of Leeds I was always proud of the fact that the Wetgate tunnel is the longest unventilated road tunnel in Europe, hence its general grim condition from all the fumes. About 10 years ago the Council had it cleaned and the walls repainted with bright red and white crosses, these lasted about a month before disappearing under the dirt and you can just about make them out now by looking closely as you drive through on both sides!

Also it has 2 horrendously bad on-slips going Eastbound, one in particular that appears from round a corner in the tunnel and regularly has cars waiting on it to join with a very limited view indeed of whats coming. Many times I've had to pull over and hope there's nothing in the outside lane as someone's come in from it too quickly and not stopped in time.

The signs are terrible - the bizarre plastic panel type signs mounted in the bridges are original to the road and looked faded and in need of changing 25 years ago when I passed them every Saturday morning on my way to swimming lessons in the International Pool.

Still, it does its job though. How I'd get from North Leeds to the M621/Elland Road without it is a very good question indeed!