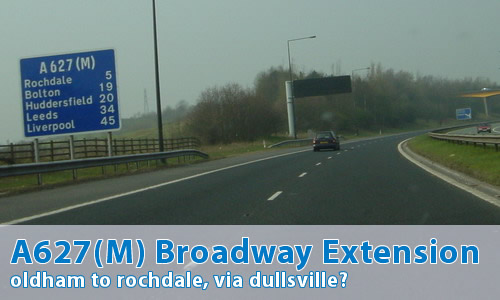 Between Oldham and Rochdale, Lancashire.

It links two major towns in Eastern Lancashire with the M62.

Unfortunately, it does a very bad job of actually linking Rochdale with Oldham and vice versa.

Eh? But Rochdale's at one end, and Oldham's at the other!

What are you on about then?

It's not really a "proper" motorway. It's more like two overgrown sliproads.

OK, let's make this pretty plain. When you arrive at the junction with the M62, you have to go around a roundabout. Not over the top, not underneath. Around.

Especially as there's peak time traffic lights on the roundabout too... It's quite a big roundabout, and apparently it was designed to allow space for a "future flyover".

So, what are the chances that after over 30 years it will be finished?

Err, none. There's a weighbridge now off that roundabout exactly where the Oldham-side of the flyover would need to be built.

Are there any redeeming features?

Let's see now - it's got its own little spur motorway, although it's numbered as part of the A627(M), rather than a different number.

That's not quite true, is it?

OK, not quite. In July 2004, a new map came into my possession, showing the spur as a different number. Ladies and Gentlemen, Boys and Girls, we present the A6138(M)!

I give up! Can I see some photographs of the motorway now?

Ian Royston points out a history of bad connections between Oldham and Rochdale:

"As a link from one Retail Park on the outskirts of Oldham to another Leisure and Retail Park on the outskirts of Rochdale it isn't at all bad, and still a much better option than any of the alternatives along long A and B roads through Royton and the like for linking the towns themselves. Then again the Lancashire & Yorkshire Railway made a mess of their rail link 150 years ago too!

However as well as messing up the main interchange, and the link road, they mess up both ends. At the Rochdale end "straight-on" leads you to a Cinema and McDonalds, at the Oldham end "straight-on" leads you to, well Manchester really along the A663 Broadway. Indeed some of the uninitiated may have actually thought it was a quick way into Manchester!

To reach either mill town from the A627(M) involves a further series of lights and roundabouts along fairly wide dual carriageways, it's a shame this little motorway didn't "flow" better into them. "

Phil G follows this up:

"The comment by Ian mentions that some may use this as a quick way into Manchester. Now with the M60 complete, if you're approaching from Leeds, and want to head round the eastern side of the M60 towards Stockport, using the A627M, then onto the M60 is quicker than heading to the M60/M62 junction 18 interchange."